Warning: Invalid argument supplied for foreach() in /home/mccrorytim/www/www/wp-includes/class-wp-post-type.php on line 526

Warning: Invalid argument supplied for foreach() in /home/mccrorytim/www/www/wp-includes/class-wp-post-type.php on line 526 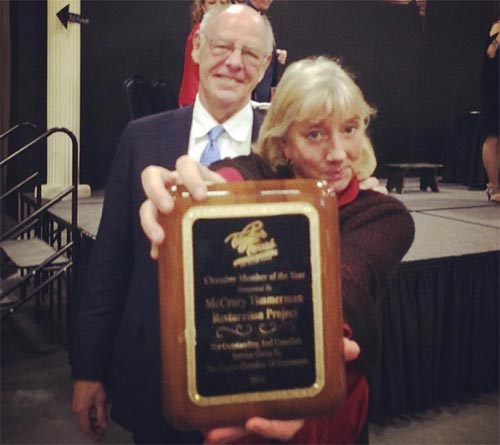 Taylor, TX  – January 19, 2017 – Judy Blundell, received the Taylor Rotary Citizen of the Year award this week at the Taylor Chamber of Commerce Banquet. Blundell has been a Taylor resident for fifteen years. During that time, she was inﬂuential in promoting Arts in Taylor and surrounding areas. In 2013, Judy Blundell and Mark Nibbelink purchased the property on 201 N. Main street and initiated the McCrory Timmerman Restoration Project.

In essence, the McCT Project has become its own economic development company recruiting over twelve businesses to join the project and creating three more businesses including a deli, coffee house, and an entrepreneurial commercial kitchen.

As often reiterated by the citizens of Taylor; Theresa Pore, the 2017 Chariman of the Board for the Taylor Chamber of Commerce, said it best, “the recognitions are well deserved. Your [Blundell] contribution to our community is immeasurable.”

The McCrory Timmerman Restoration Project is 33,000 sqft building located in downtown Taylor, Texas. It is home to the Texas Beer Company, Curbside Coffee House, 2nd St. Commercial Kitchen, 2nd St. Farm to Market Deli and many more businesses. There is opportunity to be a part of the project with business spaces still available. Downtown Taylor has some of the most beautiful historical buildings in Central Texas.  The McCrory Timmerman Building was born of the idea that community is key.  Given the opportunity, most people enjoy the interaction that occurs in a small local shopping district. The success of this project reinforces the concept a country town while simultaneously challenging local residents to take a chance and start a new business, to explore their talents and ideas and add something positive to the town they call home.

The Taylor Chamber of Commerce provides support to local businesses and guidance for the business community in Taylor, Texas.

Small Texas Towns You Need to Spend More Time In

The teeny towns you blow through on a Texas road trip are too often just relegated to a bathroom break and a caffeinated beverage. A pit stop alone doesn’t give you the chance to experience the hospitality of that one hundred year old B&B or have a cold one with the locals. Here are 8 of our favorite small Texas towns to add to your checklist of destinations.

Community Comes Together to Help Taylor Rebuild After Floods

TAYLOR, Texas (KXAN) – Families in Taylor were working to help their neighbors get back on their feet  Sunday, more than a year after the deadly Memorial Day flooding.

Volunteers took part in “A Flood of Hope” at the Texas Beer Company and Curbside Coffee with live music, and food. The event raised money to help rebuild homes affected by the flooding in 2015. More than two hundred fifty homes were damaged.

Sixteen of those homes still need repairs, including 2 total rebuilds which are estimated to cost about $200,000. In July, the community was able to raise more than $20,000 through local churches.

“We’re asking tradesman, plumbers, electricians, anyone who can offer their skills as well as monetary donations,” said Pastor Jeff Ripple of the Christ Fellowship Church.

A group from San Diego was in Taylor this week to help with the recovery efforts.

In addition to everything going on Saturday, one of Taylor’s most anticipated new businesses plans to open.

At noon on Saturday, the Texas Beer Co. will cut the ribbon and officially open the taproom in the McCrory Timmerman building at Main and Second.

Ian Davis, one of the partners in the venture, said it’s been a long 2 years.

“We’re excited — beyond excited — to finally get open,” he said.

He invited everyone who wants to be a part of the event to attend the ribbon cutting, which will be hosted by the Greater Taylor Chamber of Commerce.

He said the Pilot Brew House is still under construction so there will be only limited quantities of Texas Beer Co’s locally brewed Texas Pale.

“When that’s gone, we will serve craft beers from some of our favorite Texas breweries,” he said. “Our Pilot Brew House build out should be completed by June. That’s the next step — scale up and serve more quantities of our cold Texas Beer later this summer.”

“Taylor shares in the excitement for the grand opening of the Texas Beer Company in our historic downtown,” said Taylor Mayor Jesse Ancira. “With the addition of this new business, the revitalization of downtown Taylor is expanding and we look forward to the continuous growth in the area and recognition for Taylor Made Texas.”

The Texas Beer Co. got incentive funding from the City of Taylor to help with the Pilot Brewery and Taproom, and from the Taylor Economic Development Corp. to build a twelve barrell brewery and distribute “Taylor Made” craft beers throughout the state.

TAYLOR, Texas — Finding an affordable home within the Austin city limits can be tough, and as people look at moving elsewhere Taylor hopes to make the cut of places families and businesses will consider.

The historic McCrory-Timmerman building at 2nd and Main Street was once a department store with a neighboring hotel. After sitting vacant for years, it’s now bursting with creative minds.
ADVERTISING

“There’s a real strong arts community that I think people don’t know is out here,” explains Judy Blundell. Blundell is a Taylor resident and part owner of the McCrory-Timmerman building.

“People just want to be in it and be part of it,” she says.

When renovations are complete, the mixed-use development will consist of residential lofts, office space, a coffee shop and a microbrewery.

“We thought the next best thing to add to such a vibrant community would be craft beer,” says JD Gins, co-founder and Brewmaster at Texas Beer Co.

“not a lot of competition [but] a lot of people who want something fun to do in Taylor are going to have that opportunity here soon,” he explains.

The brewery’s fermenters arrived Thursday. They’ll be brewing onsite in about a month.

“There’s a lot of opportunity in Taylor. It’s a very affordable place to live, great neighborhoods, cool people and it’s been kind of an effort to revitalize the whole community,” says Gins.

“I think it’s wonderful to be in the middle of urban everything when you’re in your 20s, but I think as your discover more about who you are it’s nice to be in a place where you can grow into that person and you’re not constantly being poked to death by your neighbors and the noise the rules,” adds Blundell.

The housing market is seeing significant growth in Taylor as new construction pops up and sells fast, and Blundell sees more growth on the horizon as more people seek a simpler way of life.

As residents of Taylor we have a strong commitment to the community and the people who live here. The McCrory Timmerman Building is a landmark structure...